If you’re starting out HEMA you will need some material to work with. This overview provides you with modern books on the most popular weapon systems trained in HEMA. Some of these books are translations of the original source material and others modern interpretations of the sources.

Many historical sources are available for free on Wiktenauer.com with english translations of varying quality. Eventually it’s a good idea to work directly with original source material, but due to language and knowledge barriers, it’s often a good idea to start with a modern book that provides additional instructions and context.

Note: As I don’t train in every HEMA weapon system myself I haven’t read all of these books myself, but polled data from The HEMA Alliance Facebook group.

Longsword is the most popular weapon trained in today’s HEMA. The two most widespread traditions are the German school attributed to Johannes Liechtenauer and the Italian school of Fiore dei Liberi. The German school is the more popular choice amongst practitioners and has more modern books to offer. Of the four listed books here, only the last book “The Flower of Battle” deals with Fiores system. What is great about Fiore sources is that they’re fully illustrated, whereas many german sources only offert text descriptions.

As many longsword sources either lack images or a detailled step by step approach, it can be harder to figure out techniques than in more accessible systems. Because of this, more books are available with interpretations instead of just translations to modern language. 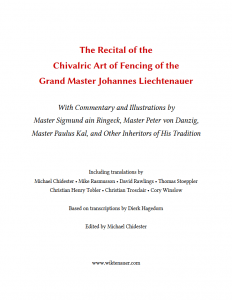 This Study Guide by Keith Farrel and Alex Bourdas is neither a translation of a specific source, nor a book with modern technique interpretations, but a compendium of german sources and where they agree or differ on how to do the various techniques. So if you're wondering what a Zornhau is and how multiple sources describe it, this book will have the answers.
The Longsword study guide is also available as an e-book trough the Academy of Historical Arts online shop.

This free PDF contains various German Longsword sources attributed to Liechtenauer, with their transcribed german texts, english translations and paintings (if available) and groups them by chapter. So if you open the Zornhau page, you're able to directly compare three text sources and three images.
The PDF is available under a CC license and a result of the Wiktenauer project, a free Wiki for original source texts, images and translations.

Fighting with the German Longsword

Fighting with the German Longsword by Christian Tobler offers modern interpretations and step by step advice on topics rarely covered in detail in the original sources, like footwork and how to grip the sword and even providing training drills.
The book isn't based on any specific source, but on Christians experience studying and teaching german sources.

To add a non-Liechtenauer source, the Flower of Battle translation of Fiore dei Liberi's manuscript Fior di Battaglia by Colin Hatcher and Tracy Mellow deals, as the name suggests, with the Italian school of Longsword.
The manuscript also includes unarmed combat, dagger, spear, axe fighting, fighting in armor and on horseback. It doesn't include the original italian texts.

According to Dierk Hagedorn, who transcribed dozens of manuscripts in the Liechtenauer tradition, a good place to start that is available in english is the Jude Lew manuscript and if anyone knows what makes a great source it’s Mr Hagedorn.

Rapier is a popular weapon system in HEMA, that can entail everything from Rapier used alone or with something in the left hand like a dagger, shield or cloak. There are many different Rapier traditions and fencing masters from countries such as France, England and Italy.

As Rapier sources are younger than longsword sources, the art style is far more evolved and most Rapier manuscripts present both images and detailled text to the reader.

Coincidentally, three of these books are translations of original Rapier manuscripts by Italian masters translated by Tom Leoni, which is regarded for the high accuracy of his translations.

This book on Rapier combat contains an intro by Tom Leoni on historical context of the time Giganti lived in and translations of Giganti's first Rapier manuscript. Giganti was an italian fencing master and his book contains single Rapier and Rapier and Dagger. Giganti is a more beginner friendly source, as his texts are on the shorter and concise end of Rapier manuscripts.

This is the second and last Rapier manuscript by Giganti, this time translated by Piermarco Terminiello and Joshua Pendragon and follows the same style of teaching while expanding on the teachings of his first book. Single Rapier is taught as well as with various shields and with a Dagger.
The reason the book has "lost" in its title, is that so few copies were produced that even shortly after Gigantis time, people were unsure that it really existed.

Salvator Fabris Scienza d'Arme (The art of the Italian rapier)

Fabris manuscript deals with Rapier, Rapier and Dagger, Rapier and Cloak and is longer and more detailled than both Giganti and Capo Ferros manuscripts. Due it going into more details it can be harder to understand, but offers more in depth explanations.
The high price listed on Amazon stems from it being officially out of print, but it is also available as print on demand over at Lulu.com.

Ridolfo Capoferro's The Art and Practice of Fencing: A Practical Translation for the Modern Swordsman

The Art and Practice of Fencing is another source from an italian Rapier master translated by Tom Leoni, containing Single Rapier, Rapier and Dagger, Rapier and Cloak and Rapier and shield. Capoferros book contains many illustrations of techniques and Leoni added a glosarry and some more general information on Rapier fencing.

When fighting with Sword & Shield, the most popular system trained in HEMA is probably the Sword & Buckler manuscript I.33 also called the Walpurgis or Tower Fechtbuch, which is also the oldest surviving fencing manuscript. While its origin lies in what is now Germany, the text is in medieval latin.

The shield used in I.33 called a buckler, is a small hand held shield that is not strapped to the arm and can be moved freely from side to side. Bigger shields like the Targa and Rotella are used in the Bolognese tradition. Other shield variations, like the viking round shield popular amongst reenactors, bring a lack of sources with them.

There is a strong tendency for fencing manuscripts to become clearer in their descriptions and images the younger they are, since both the language and the art style evolved a lot over time. Due to this the I.33 manuscript is among the harder sources to interpret, with the Bolognese tradition being more accessible for many.

The Complete Renaissance Swordsman: A Guide to the Use of All Manner of Weapons: Antonio Manciolino's Opera Nova

The Complete Renaissance Swordsman or Opera Novaas it is called in italian, is a translation by Tom Leoni of a source that stands in the Bolognese tradition. It deals with single sword, sword and shields of various sizes, sword and dagger and even two swords and polearms.
As Opera Nova was written around 200 years later than the I.33 manuscript, the images and text instructions are often easier to follow and more beginner friendly.

This Facsimile of MS I.33 deals with the use of Sword and Buckler and tries to reproduce the original manuscript as faithfull as possible, while adding modern english translations of the latin text.
As this book does not contain any interpretation and the style of the images and text descriptions can be hard to follow for beginners, so it is advised to also get one of the I.33 interpretation books listed here.

Sword Fighting: An Introduction to the Single-Handed Sword and Buckler

Sword Fighting by Herbert Schmidt, is a Sword and Buckler how-to book based on the I.33 manuscript. Mr Schmidt has been working with I.33s Sword and Buckler system for many years and includes his ideas with step by step illustrations, posture, footwork and free fencing and complementary techniques from other masters.

I33 Fencing in the Style of the Walpurgis Manuscript 2nd edition

I33 Fencing by Andrew Kenner is also a Sword and Buckler how-to book based on the I.33 manuscript. It contains step by step instructions and exercises to get you started with sword and buckler.

As sabre is the youngest weapon system on this list, there are many surviving sabre sources available ranging from many military to civilian sabre sources for all kind of usages and regions. As there is such a wealth of material available depending on what exactly you want to learn, it’s not possible for me to provide good beginner sources as with the other weapons.

If you want to start with saber it’s a good idea to learn what kind of sabre you’d like to use and from which region and then ask the community which sources they would recommend for that specific combination.