Why fence in a HEMA tournament?

Some month ago a nearby group decided to run a small longsword tournament as part of some local festivities, that also included a separate beginners bracket. As this sounded less threatening than the bigger events, three of our rookies decided to participate.

Learn how to read minds and the value of tournaments in this article!

We prepared them with judged sparring and the likes, provided the missing gear and finally let them go do their fencing. They had a great time and did very well, taking home the first, second and third place in beginners. What we weren’t told before was that the fighting ground would be filled with sand, which was a bit… surprising and made a big difference in regards to footwork. So it was highly interesting to see training taking effect and how they approached their fights, but the most interesting thing was revealed in our discussion afterward.

One of them had the realization that this was the first time he truly tried to read his opponent.

Anticipating what the other fencer was scheming, analyzing his level of skill, observing the way he moved and planning how he would counter him. In a sense reading his mind and reacting to what he was going to do, instead of what he wanted you to think he was doing. The others confirmed that this was a new experience for them as well.

Now even though we rotate training partners regularly and our pool of available fencers is not the smallest, with up to 15 members participating in a longsword class, this is an experience that can’t be simulated. Yet this is a skill I deem crucial for the development of competent fencing. I believe that reading an opponent and deciding the right tactic and strategy to defeat him, is as necessary a skill in a historical duel as it is in a modern tournament fight.

If, for example, I’m able to conclude my opponent has slower footwork than me, I might be able to safely utilize long range attacks and zeck to his hands or use gayszlen. If he’s on the other hand a lot lighter than me, has a weak body structure and bad stance I might want to enter into grappling and overpower him.

These observations and the resulting decisions can happen before the actual fight or during it and should be constantly reevaluated with each new piece of information gained. Of course, an opponents attempt to mask his intention plays a major role as well.

Can this be simulated?

It’s rather obvious that a fencer doesn’t have to read his club mates the same way he has to read an outsider, since he has been training with them multiple times a week for many years. One could argue that these observation and decision making skills can be trained internally as well, by assigning different tasks and tactics to the club members, changing their usual behaviour. Like a fencer usually fighting from the Nach getting the task of fencing from the Vor as much as possible and another getting the task to enter into grappling distance if possible.

While this can be a worthwhile exercise in and of itself, I don’t believe it can be used to train the discussed ability to the same degree a tournament fight against an outsider would. Even though a fencer might try to use techniques or tactics he usually doesn’t, the fundamental tools he’s using are still the same. He still has the same set of techniques and follow-ups he’s good at, his body stature and structure is still the same and though he’s trying to behave differently, the ingrained tactics he’s using and the basic way he makes split second decisions are still the same.

Basically, the people you fence with are still the same regardless and won’t require the same amount of reading that an outsider would require. So this crucial ability can only be trained by fencing with people outside the circle of clubmates on a regular basis.

Can this be achieved with friendly sparring?

One could further argue, that this ability can be trained in friendly sparring with outsiders, without the need to engage in a tournament specifically. While it is true that fencing with outsiders in a friendly fashion is one of the most fun ways to improve and should be encouraged regardless, I also think this is not a sufficient substitute.

The major differences are that a friendly session lasts as long as both fencers like, which usually seems to be at least a dozen exchanges or a couple of minutes. Also the mindset is often one of playing and trying out, as no one wants to “friendly” fence with the guy going 100% each time every time and hitting like a truck.

So what usually happens is that both fencers start out slowly, adapting to each other over the course of multiple exchanges. They’re trying to find the speed and force where they can fence comfortably with each other. In my experience, this leads to an emphasis on the later exchanges and a disregard for the first ones, as the later ones are often felt to be more interesting and more likely to be remembered.

Also someone with rather friendly intentions might not try to mask his movements as much if he perceives a skill gap. When people try to be nice, I find that they’re more likely to lower their level so you won’t have to fence too far out of your comfort zone.

Yet this is the exact opposite of a historical duel, where the first hit can be decisive and you might not get a second chance.

Do tournaments emphasise the first exchange?

The importance of the first hit depends on the specific tournament format. Some rules decide a winner by first hit only, placing a big emphasis on it. Others have their participants do multiple exchanges, with scores from each exchange adding up. This leads to less emphasis on the first hit and some time for adaption, but since even the very first exchange is factored into the total score, it can’t be completely disregarded.

Also, the competitive mindset is quite different. Opponents will try to mask their real intentions as much as possible, to stop any counter tactics. They won’t try to meet your comfort zone, but instead try to overwhelm you with their skill. Additionally, the force levels are usually higher than during club training or friendly sparring. As you know by my last article on when to hit hard in HEMA, I’m not a supporter of hitting hard during regular training, but participating in tournaments requires a fencer to learn to deal with it, which Keith Farrel has pointed out as well. Anticipating this higher level of force changes the mindset accordingly.

It goes without saying that HEMA tournament rules and protective equipment inevitable introduce their own artifacts and limitations to our fencing, as authors like Guy Windsor or Roger Norling have pointed out. You should definately be aware of this. Yet I think the overall benefits of tournaments far outweigh their disadvantages and that they are a worthwhile training tool for reading minds. 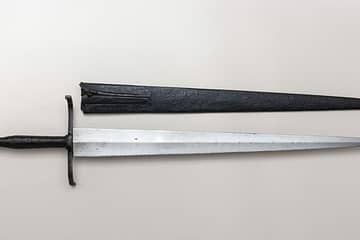 German Longsword – What it is and how to learn it

When you’re thinking about German longsword you’re probably thinking of epic battles, knights in shining armor and duels to the death! But did you know that longswords were not the main weapon of war? That Read more…

To fight successfully you need to be able to apply your techniques in any free fencing situation. In this article I’m going to analyze the learning process so a technique can be used in free Read more…

When to hit hard in HEMA

This article was first published on Hroarr in 2016. Sparring and free play are important tools on our way to becoming more competent fencers, while at the same time the approaches and views on how Read more…